Question 120 is the final question in The Impossible Quiz 2, and the last of Chris's Incredible 20. It's an unskippable question that references previously answered questions from this Quiz, and it is completely random: you will get a different variation every time you get here.

Below is a gallery featuring all of the possible tasks you can get upon arriving to this question. The correct answer to each of them has been highlighted with the mouse (appears in green), and it has been typed below the image, bolded and between brackets.

[41] The "Click the smallest (dot)" question. You actually have to search for it since it's invisible.

[43] The random question taken from the first game.

[49] This one contains gibberish instead of words.

[60] Longcat's only appearance in the Flash version.

[66] In case you're wondering, it's that creature with leaves all over his body.

[69] Probably the easiest one yet.

[99] ...red balloooons go byyyy~
Add a photo to this gallery

This question works the exact same way as the original in the iOS version of The Impossible Quiz 2. The only difference is that there are way less possible questions than on the Flash Version.

Likewise, here's a gallery featuring the possible tasks you can get upon arriving to this question, and their respective answers. 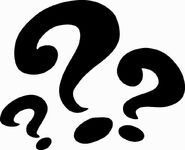 [38] Where you had to tap the screen like crazy.

[62] Longcat's only appearance in the iOS version.
Add a photo to this gallery

If you were intelligent (or lucky) enough to click the correct answer of the question you were given, Chris will come from below the screen holding a trophy, purring as the word "Complete!" appears in big blue letters above him and an off-screen crowd cheers. The trophy is made of gold, with a drawing of a paw that has "IQ2" written on it.

After they fade away, you'll be presented with the Quiz Statistics of your playthrough: how many lives you lost, how many power-ups you found, and how many of them you have used. Using this as the base, you will be then presented with your Impossible Quiz 2 Grade, which can go from as low as an F to as high as an A*.

Retrieved from "https://impossible-quiz.fandom.com/wiki/Question_120_(The_Impossible_Quiz_2)?oldid=32409"
Community content is available under CC-BY-SA unless otherwise noted.