Question 70 from The Impossible Quiz Book is the twentieth question of Chapter 2, and the tenth and last question of the game to be presented in ZX Spectrum-inspired graphics. It's the second boss question of the game, and this time you're introduced to a mini-game based around the most iconic character and video game of the 80's arcades: Pac-Man. This question is unskippable as well, though there are no Skips in this Chapter whatsoever.

When you get here, the ZX Splapptrum will print the game's title screen, which goes as follows:

As soon as you hit the green button, you're presented with the Pac-Man-inspired maze, made by black hallways and purple walls. You are in control of the white circular character in the middle, who is none other than Splapp's own character Frank (or rather, only his head).

The basic gameplay of the original game remains exactly the same in here. Your task is of course redundantly simple, yet annoyingly hard at the same time: collect all 143 of the little white pills in the game without being killed by the ghosts. If Pac-Frank touches any of them, he'll literally bray like a donkey and faint, and you will lose a life.

This game can be extremely hard for first-timers, since three of these ghosts have some scarily good artificial intelligence programmed in them, and you can get easily cornered. There is a trick, though: just like in the original game, all ghosts have a natural characteristic, albeit not following the same pattern as the ghosts from the original game. It's worth noting that Pac-Frank can cut corners slightly, which the ghosts cannot do. This means you can round corners to gain a little bit of distance between you and the pursuing ghosts for a slight edge.

Here's some explanations of each of the ghosts in here:

After collecting all of the pills, the ZX Splapptrum will then remove the maze from the screen and print a congratulatory message, containing the exclamation "Complete!", as well as Pac-Frank's eating animation and a "Continue >" button, upon pressing which, you'll be asked once again to update the Guide.

Once you're done with the maze, the following message will appear on screen, asking you to update the firmware version of The Phlovomite's Guide to the Galaxy:

Alert!
New firmware found. You must update to continue.
Click update to... update.
Smash your computer with your fists of fury to cancel the update.
UPDATE

Simply press the green text button and the device will start downloading and installing the update, complete with a pixelated drawing of a Phlovomite gang; after the update has been finished, a number 7 written in big black retro-styled font will fill the screen, similarly to the "5" that appeared following the previous update.

The screen will then cut to black, with Splapp's Sega-inspired "Loading" jingle (seen in his animations "Sonic Breaks His Neck" and "Orbinauts") appearing right before the title screen of "Question 71-80", which contains the subtitle "Hello, World.".

This officially marks the beginning of a section that can be considered an homage to the Retro era of video games, where the world saw the glorious arrival of the 8-bit and 16-bit games many people keep in their hearts nowadays; this era will last for the following 10 questions, starting with the next one: Question 71. 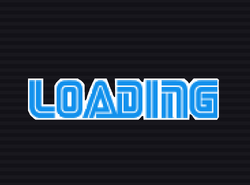 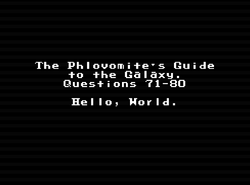 Hello, Questions 71-80.
Add a photo to this gallery
Retrieved from "https://impossible-quiz.fandom.com/wiki/Question_70_(The_Impossible_Quiz_Book)?oldid=31508"
Community content is available under CC-BY-SA unless otherwise noted.