SANIC A normal human being :)

Where can I be found?

Either by my username, or Matt, if you prefer. :3

What's up people! My name's RockingBlur. I'm from Argentina, and I'm a huge fan of Sonic, Pokémon and, of course, the Impossible Quiz series!!

I'm an all-around Internet lurker. You can usually find me on my YouTube account RockingBlur, where I upload music belonging to "Sonic the Hedgehog" Sega Genesis hacks/mods/fangames. You can also find on me Twitch and deviantArt, though I don't stream nor I upload stuff; I just follow other people in those sites.

I use Tumblr as well now, in case you wanna drop by and check the random stuff I post/reblog or just say hi, and you can also find me on the Pokémon 3D forums, under the username A-S-Matt. If you are a Pokémon fan, I highly suggest trying that game out! ;)

My story with the TIQ series

I played the first and second Impossible Quizzes maaaaany many years ago, when I was... what, 11-12 years old? Can't exactly remember... The funny thing is that, since I didn't quite have a grasp of English, I didn't understand most of the questions, so for the most part (more than it should, actually) it all came down to guessing for me, or looking up the answers. SHH. And somehow, I managed to complete both of them!

Years passed, I actually learned how to English, and I had completely forgotten about these games. That was, until one day I saw in my YouTube subscribers feed that one of my favorite YouTubers, PewDiePie, had uploaded a video with the name: "The Impossible Quiz".

I couldn't believe it... He was actually playing that game! And while he was struggling with the second Quiz, some Googling around made me come across what I believe to be the best games of the TIQ series: the Book!

I also came across this Wiki, which was actually quite a surprise; I never thought someone would make a Wiki for the Quizzes! I noticed that there was a LOT of stuff to be done, so I thought, since I already had a Wikia account, I could start making edits right away! So I went ahead and rewrote some things in the Answers section of the Quizzes's pages, then I added pics for the Tab Cheat page, then Chris's Incredible 20, and so on, and so forth... And here I am :D

Even though all of the Quizzes have a charm of their own (especially the first two, which have that nostalgic feel), my favorite Quiz game without any doubt is The Impossible Quiz Book, Chapter 2, for several reasons.

First of all, it's based around video games, and Splapp himself seems to be a passionate fan of games, so the outcome could only be good! Secondly, it feels like Splapp put considerably more effort in this Chapter than in the other two, and it really shows: the plot was well-developed, the visual themes and their spread throughout the fifty questions were greatly paced, as well as the transitions between each, and the great majority of the questions (especially the mini-games) are interesting and/or fun.

Last but not least, the soundtrack of this game is by far the absolute BEST of the series in my opinion. All of the tracks fit with their usage in the game, and some of them are just plain brillant! Splapp chose these tracks really well, and they certainly make the Quiz way more enjoyable!

This Quiz is filled with lots of memorable moments, but my favorite question of the game has definitely got to be Question 107 ("How do you do?", with the fake Game Over screen). It's actually a pretty clever idea, and the options are also fun to read! 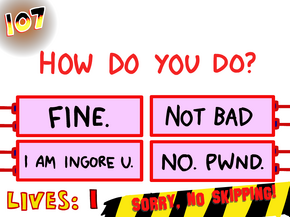 Best TIQ question!!
Add a photo to this gallery

This one's a bit harder, since there are many fun questions in this Quiz. But I'm sure my favorite would definitely be Question 81 ("Click the anser!"). I think it's a great idea to use the word and concept of "anser" as a pun on "answer", and I love animals already, so having 10 pictures of different animals as options is something I really loved in this one!

I actually have 2nd and 3rd places for this Quiz: my second favorite would be Question 107, the one that asks you a random question you have already answered, but omitting the options. It feels really good to be able to correctly remember the spot of the answer in each case, and I don't really feel the same with Q120!

Finally, in third place would be Question 90; the giant wall of text with the 1-second bomb. I find the stuff written on the text wall really funny, and making a giant 1-second bomb popping up out of nowhere is pure genius! 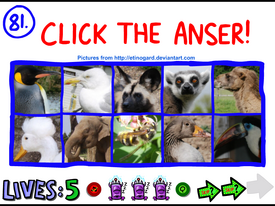 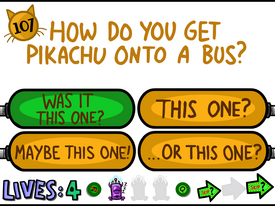 Third best TIQ2 question!!!
Add a photo to this gallery

By far, the one with the best questions EVER. It's hard to even pick a single one of each Chapter, but I think I've made up my mind here. 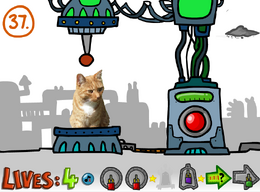 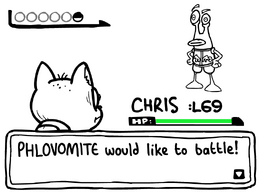 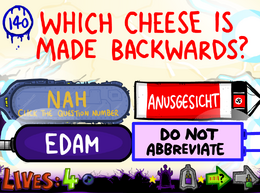 One of the best TIQB Chapter 3 questions!! 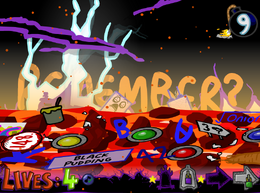 The other best TIQB Chapter 3 question!!
Add a photo to this gallery

Will update with more quotes of the other playthroughs I've seen so far but for the moment it's only Pewdiepie. :V

WARNING: Lots of censored swearing... :U

TheRPGMinx and Krism (they only did one part; Minx got pissed due to the comments on the video and quit the playthrough altogether xD)